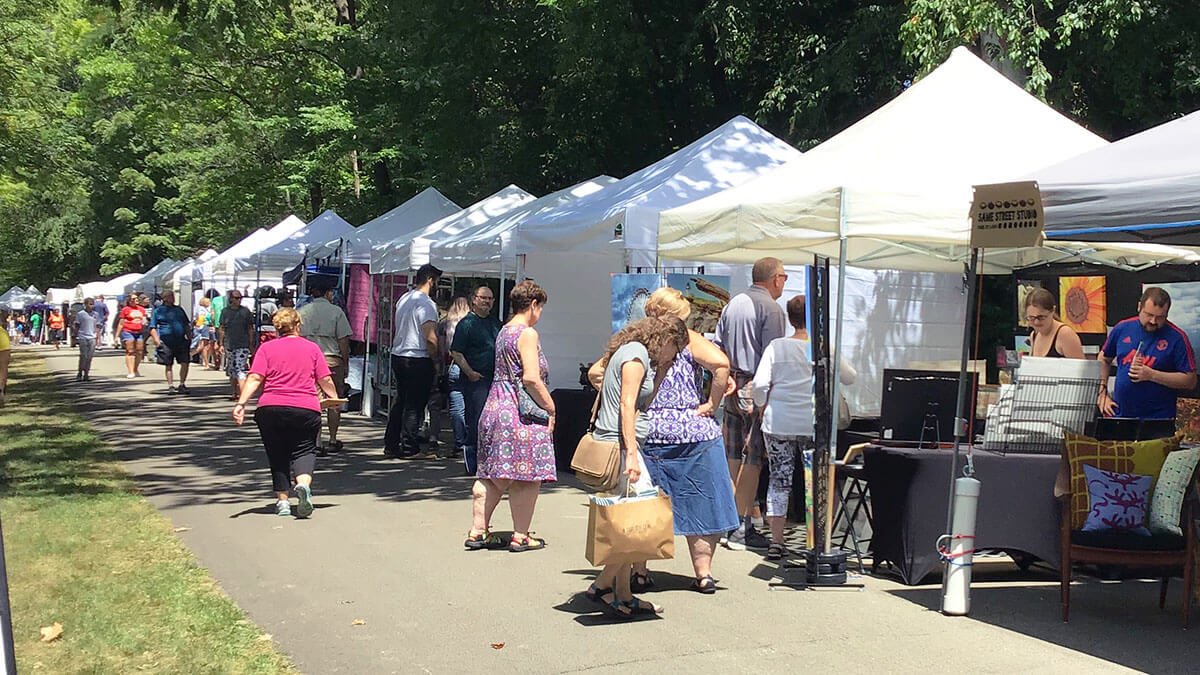 Early Saturday afternoon, the booth Lydia Puddicombe shared with two other artists at the Crystal Lake Park Art Fair was so packed you couldn’t even get in. When asked how sales went as the event was winding down later in the afternoon, she opened her eyes wide and gushed, “Amazing!”

Urbana’s juried art fair was a long time coming. Peoria has had one for 57 years, but Springfield can lay claim to having the longest-running event of its kind in Central Illinois: the Old Capitol Art Fair, which recently celebrated its 58th anniversary. Decatur isn’t far behind, with its Arts in Central Park event going into year 56. Normal’s Sugar Creek Art Festival is 36 years-old, and even tiny Canton, West of Peoria, got its own juried art fair six years ago.

Meanwhile, Urbana — home to so many of the artists who call CI home — had the Craft League of Champaign-Urbana (CLCU) Annual Art Fair. But Urbana shared the CLCU show, like so many other things, with its twin city. And with the closure of the Urbana Civic Center, the CLCU show had to pack it up; its 37th edition will be held in Savoy in November.

Clearly, something had to be done. And local resident Jill Miller, who sells her hand-batiked clothing and homewares under the Hooey Batiks moniker and travels all over Illinois to show her creations (pictured below), was the one who got the ball rolling on what would become the city’s Crystal Lake Park Art Fair.

“They have wanted to do an art fair here for the longest time, and it was just the right time,” said Miller, as the inaugural edition of the event was wrapping up Saturday afternoon. “I’ve been doing art shows for almost 30 years, and I just know people. So I invited my artist friends — I invited them to apply.” Miller served as the fair’s artist adviser, but she gave much of the credit to 40 North. “They do events all the time — they know what they’re doing.”

40 North’s White returned the love, and also credited Janet Soesbe, the Urbana Park District’s community program manager, with doing much of the work. “We are absolutely thrilled, because being the inaugural show, we’re just testing out the logistics,” Miller said. The artists’ booths were lined along a tree-shaded parkway, and getting these required some walking, possibly down a hill, depending on where visitors parked.

“We’ll continue to improve that every year,” White said. “We took a lot of notes and lots of feedback from people to see how they access the park.” The weather helped, she noted — no rain, no unbearable heat. “And the artists have been amazing, and of course the quality is top-notch. And the crowds came out, and they were ready to buy.”

The artists I spoke to were indeed pleased. Johann Rischau of Urbana-based Norden German Design Studio, whose booth showcased the Pipapo jewelry line designed primarily by his wife Anna Gutsch, couldn’t quantify sales but was impressed with the foot traffic. “We used to travel to a lot of art shows, but now that we have a three-month old we are more limited,” he said as he pushed a stroller back and forth. “So we are happy to have an art show here.”

Springfield-based Eli Brown said she got lots of sales, so much so that her supply of tiny houses (pictured below) was dwindling.

“And it’s just gonna get better,” Miller said. The next edition of the fair is literally already on the calendar — Aug. 1, 2020.

Here are some more creations by other artists from Urbana and across CI we were able to visit with, starting with Lydia Puddicombe’s woodcut prints:

And what better way to close than with a group photo?