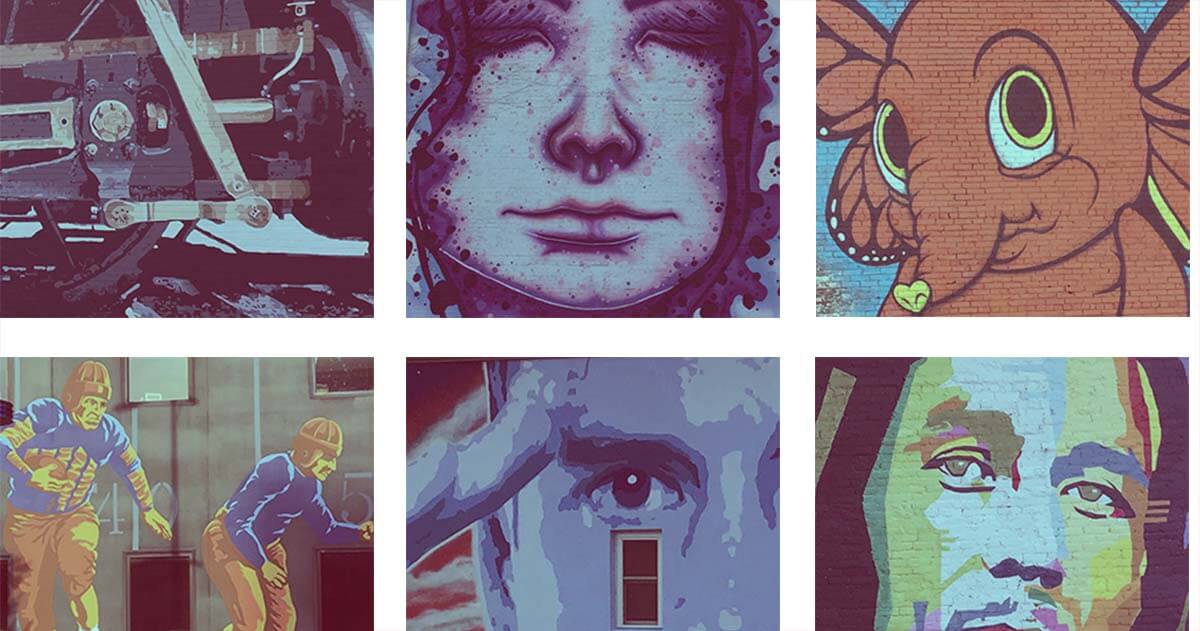 Peoria is definitely not the only major city in the region that’s using street art to beautify its streets and boost civic pride.

DAAC Executive Director Jerry Johnson created the first mural to be completed in 2019. Painted on the side of the Kurent Safety building in the Lakeview neighborhood, this salute to veterans is Johnson’s third work for the project, and is also the one that extends the project’s reach farther from downtown.

“Our process is that we either find a wall and speak to the building owner, or the building owner says ‘I got a wall, I’d like you to use it,’” says Johnson. “The last couple of year’s we’ve asked building owners, ‘is there a theme you’d like to suggest to the artists?’”

In the case of his most recent mural, the owner of Kurent Safety is a veteran, and he suggested a veteran-focused work. A public request for proposals yielded several designs, of which some were veteran-themed and some weren’t.

“Then we have a committee of artists and others that sort of vet the initial wave of design submissions, and then we usually present three to five to each building owner,” Johnson goes on. “So they do have an element of involvement, but they don’t get to dictate what they want. If that is their interest, then we suggest these artists that they can contact and we commission that work. So we like both the artists to be comfortable with what it is they’re creating, and the building owner to be happy with what’s being created.”

Read on about the nine other mural that have been completed for the project so far.

Local artists Amy Rankin and Michelle Stephens got started last summer on Unstoppable, which depicts a speeding steam engine on the side of the Millikin Wrestling facility.

The 128-feet long mural, based on an actual locomotive located at the Monticello Railway Museum, recently became the second DAAC Mural Project work to be completed in 2019. The artists aimed to pay homage to the wrestling team as well as to the rail industry that played a key role in Decatur expansion.

2019 turned out to be a particularly productive year for the Decatur Mural Project. Eric Weatherford, a Decatur native and Millikin University graduate, completed the year’s third mural in early December. We snapped a photo of the work in progress in October:

But the final product is much more vibrant, as you can see in this photo provided by DAAC:

In 2018, California-based Colin Salazar painted “Eyesdown,” a monumental scale rendering of a metal print he originally created in 2015.

In September 2017, Nick Beery, who runs Coalesce Studios gallery in Sullivan, painted this mural based on the geometric concept of the golden spiral, on the side of the Board Knight game store.

The mural Millikin grad Eric Weatherford recently completed downtown is actually his second work for the Decatur Mural Project. The first one was painted in August 2017 on the side of Garcia’s Pizza near the Millikin campus.

Ron English, a Decatur native who earned international renown and coined the term POPaganda to describe his mashups of low- and highbrow cultural icons, including brand advertising, came home to paint this mural in the summer of 2017.

Painted in 2016 by local artist Shani Goss and her husband Tronnie Goss, this mural elicits good vibes with the legendary reggaeman’s likeness, along with the song title “One Love” (stylized as “1Love”) and the lyrics, “Let’s get together and feel alright.”

Birthplace of the Bears

The second installment of the Decatur Mural Project was painted by Decatur Area Arts Council Executive Director Jerry Johnson in 2015, is a tribute to another city icon: the Decatur Staleys, the football team that would later head north and become the Chicago Bears.

The inaugural piece of the Decatur Mural Project was, appropriately, a tribute to the city’s namesake, Admiral Stephen Decatur, a Revolutionary War hero. Decatur Area Art Council Executive Director Jerry Johnson painted the mural in the summer of 2013.