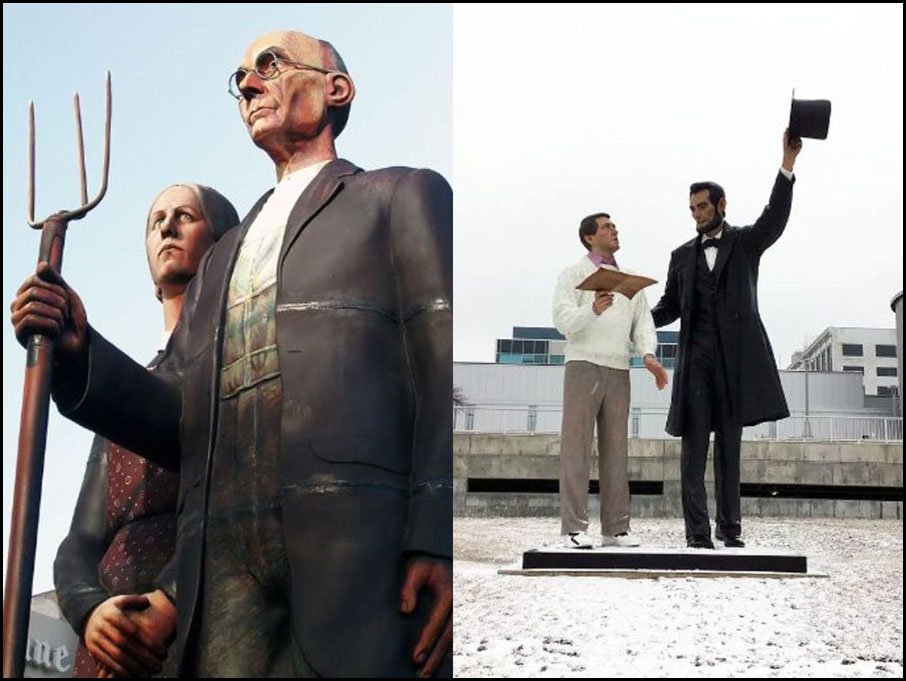 For nearly two years, visitors to the Peoria Riverfront Museum have been greeted — and most likely, surprised — by a supersized likeness of Abraham Lincoln standing next to an unidentified man wearing contemporary clothing. Here’s what that looked like on an icy Sunday in February.

Now for the explanation. The 31-foot tall, 19-ton sculpture, named “Return Visit,” was created in 2014 by Seward Johnson, who’s a grandson of the Johnson & Johnson founder but is better known for his public art. When his works are not at Grounds for Art — a 42-acre sculpture park and museum he founded in Hamilton, New Jersey — they are on display across the country, or even internationally.

“Return Visit” is an enlarged version of an original work by Johnson that was commissioned for Gettysburg Plaza in Pennsylvania in 1991. It depicts President Lincoln gesturing with his famous hat to the bedroom in the Wills House where he finished writing the Gettysburg Address before delivering the speech at the dedication of The Soldiers National Cemetery. Next to him stands an average dude holding a bronze copy of the address, symbolizing that Lincoln’s words are just as relevant today as was when they were delivered by the 16th president in 1863.

“Return Visit” was on display in Chicago next to the Tribune Tower in 2017, and when the Peoria Riverfront Museum found out the sculpture was wrapping up its Chicago run, they mobilized donors and volunteers to bring “Return Visit to Peoria” just in time for the museum’s Illinois Bicentennial Exhibition.

But on May 21, Lincoln is making away for another giant likeness of American institution: the pitchfork-yielding Iowa farmer standing next to his daughter in Grant Wood’s 1930 painting, “American Gothic.”

Yes, this is another Johnson sculpture, named “God Bless America,” which stands 25 feet tall. “Peoria is surrounded by the world’s richest and most productive farm ground,” said museum president and CEO John Morris in a prepared statement. “For years we have stood as the Silicon Valley of agriculture technology. The Peoria Riverfront Museum is thrilled to work with Seward Johnson to bring this famous monumental bronze in gratitude for all farmers and farming does for our region and our nation.”

Here’s what “God Bless America” looked like when it was displayed in Chicago in 2009 near — yep, you guessed it — Tribune Tower.

But you won’t have to travel far to see “Return Visit.” On May 22, a crane will lift Lincoln and his modern-day companion high into the air before they are setting them in place at their new home at the corner of Sixth and Jefferson Streets in Springfield — right in front of the Abraham Lincoln Presidential Library and Museum.

The sculpture is coming to Springfield thanks to a partnership between the presidential library and the Springfield Convention and Visitors Bureau.

“What an incredible opportunity to host Seward Johnson’s ‘Return Visit’ monumental Abraham Lincoln statue for two summers,” said Scott Dahl, executive director of Visit Springfield in a prepared statement. “The City of Springfield is beyond thrilled for this opportunity to draw tourists to our city with this unique experience.”