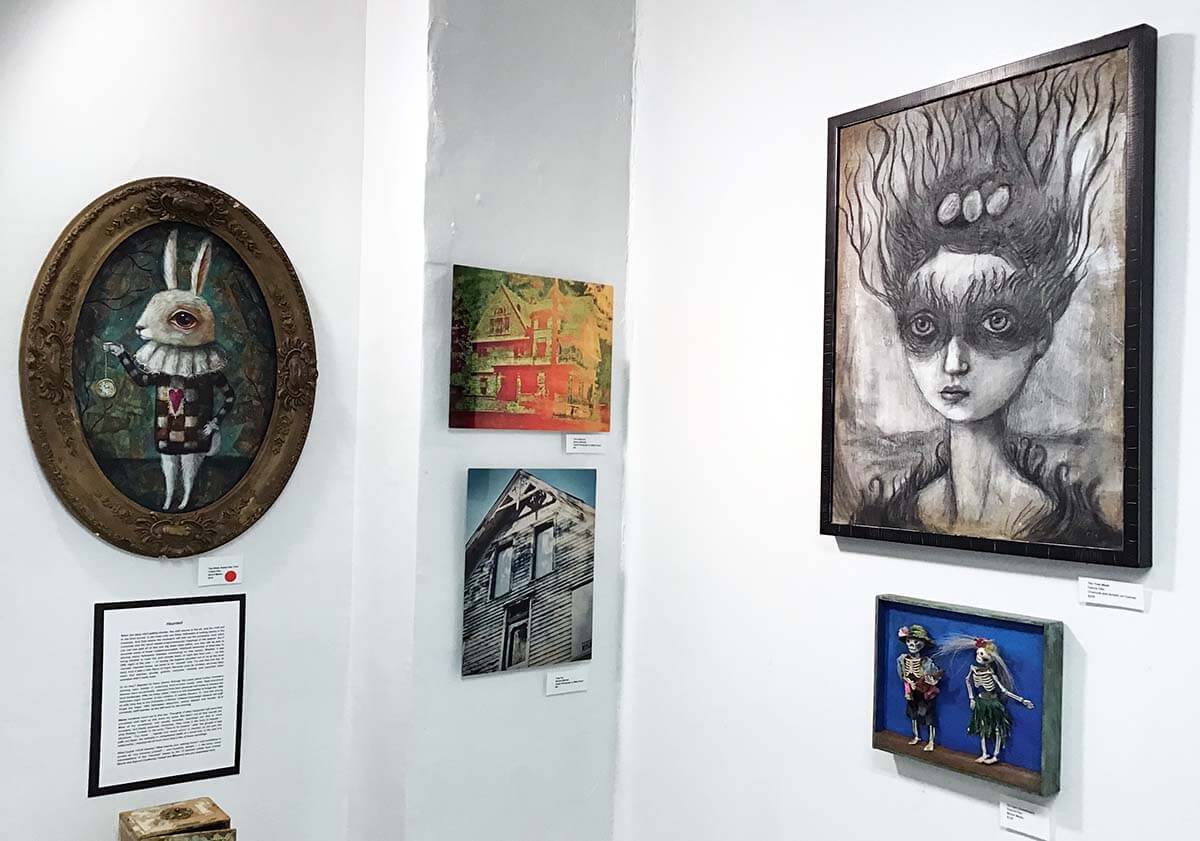 The space is called ACME Elfworks, but its current exhibit is more like The Nightmare Before Christmas: Equal parts kooky and spooky, playful and artful.

And unless you’ve been there before, finding it feels like an adventure in and of itself, specially if you get to downtown Champaign after hours and have to navigate the corridors of the old Lincoln Building when they’re deserted and — well, let’s just say “atmospheric.”

Since we were there on a mercilessly rainy late Saturday afternoon, we pretty much had the place to ourselves.

Head Elf Melissa Mitchell quickly pointed out how lucky we were, because the gallery was packed the night before during downtown Champaign’s new Fourth Friday Art Walk.

Mitchell, who worked for 30 years at the University of Illinois at Urbana-Champaign’s News Bureau, is an assemblage and photography artist who’s been showcasing her work, renting out studio space to kindred spirits and organizing all sorts of art happenings under the ACME Elfworks moniker for the past eight years.

Last October, Mitchell hosted “The Freak Show” — an exhibit billed as “circus sideshow meets the cast of the classic film ‘Freaks.'” To which “Haunted” is a sequel of sorts.

“These are curated [exhibits],” Mitchell says. “And that’s the fun for me, because the writer in me still wants to work with themes. “So I think of artists I know who could do this kind of art, and then I give them the theme. And it’s fun to see what they can come up with.”

Mitchell announces the theme around late August or early September, and artists are free to contribute in any way they wish. “I was surprised last year with ‘The Freak Show,’ because I said it didn’t have to be new art, it could be older pieces, some of which I had already seen, and thought it fit the theme really well,” says Mitchell. “But I had several people who did new work, and this year too.”

“Haunted” features lots of classic monsters and Gothic imagery, of course, but also many creations that range from whimsical to bizarre, some of them more inspired by Mexico’s Dia De Los Muertos than its Anglo cousin, All Hallows’ Eve. Painting, photography, and mixed media — including Mitchell’s own assemblages, often incorporating vintage dolls or doll parts — are more prevalent, but there’s room for fiber and other media.

While a few of the participating artists are from out of state (with Hawaii-based Debra Fair being by far the most far-flung one), most of them are based in Champaign County or elsewhere in Central Illinois (Tuscola, Springfield). Some, like Lydia Puddicombe and Eli Brown, are naturally drawn toward dark imagery; but in some cases, like photographer Fraya Replinger and batik artist Jill “Hooey Batiks” Miller, the exhibit highlighted a side of their work we hadn’t previously seen.

You can still visit “Haunted” on Friday, Nov. 1, from noon to 6 pm. On Saturday, Nov. 2 — Day of the Dead — the exhibit will be open to the public from 11 am to 8 pm, with a closing party starting at 5 pm. Much of the artwork has already been sold, but all of it will be on view until the exhibit closes, so anything that doesn’t have a red dot by it can still be added to your collection.