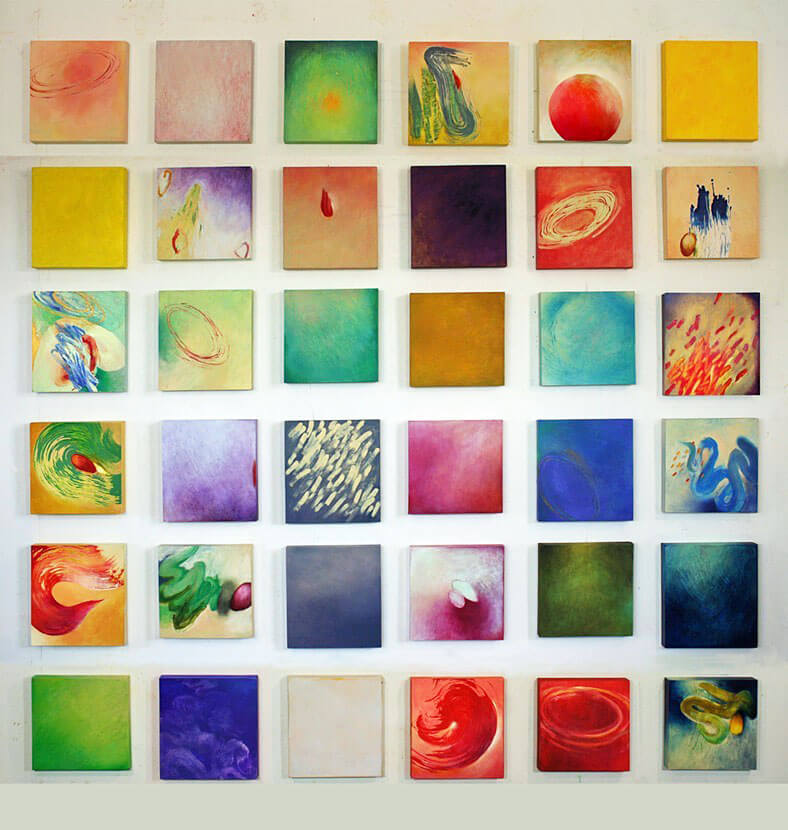 "100 Famous Views of the Universe"

A celestial artwork by Champaign-Urbana painter Jess Beyler will be on view in the lobby of one of the area’s most prestigious addresses for three years, starting this Friday.

The work, “100 Famous Views of the Universe,” was chosen out of more than 20 written proposals submitted by local artists by a jury comprised of tenants and management from One Main Management and M2 on Neil — a nine-story, mixed use building in the heart of downtown Champaign that boasts over 80 retail tenants, in addition to foodie favorites Miga and Destihl. “The submissions that came in were so creative and inspiring, it was truly difficult to select a single artist to showcase,” said Dave Jones, President of One Main Management. “This is hopefully one of many ways we can support the arts which add to the charismatic atmosphere of living and working downtown.”

Beyler, who holds a BFA from Maine College of Art and an MFA from the University of Iowa, has exhibited her work in Chicago, New York and of course Champaign-Urbana, among other locations. Light, space and motion are the hallmarks of her work. “This piece was created specifically for the site at M2,” she said. ” I have worked to create a piece that can be seen either in its entirety or in smaller sections and still be compelling, a piece that invites you to notice something different each time you see it, a piece that can handle the light reflections that happen at night with the streetlights and pools of spot lighting without losing its compositional integrity, a piece that will open the space out rather than close it down.”

Beyler named two sources of inspiration for “100 Famous Views of the Universe.” One is ancient: “100 Famous Views of Edo,” a series of woodcuts published by Japanese artist Hiroshige between 1856 and 1859. “These prints were a bit like travel posters or souvenirs for the famous city of Edo,” Beyler said. But her other source was closer to our time: photos taken by the Hubble telescope. “Some of them have dramatic events in them, some of them contain more subtle areas of light and energy,” she said. “I think of each one as a snap shot of one particular place in the infinite (to us) heavens that, gathered together, give a sense of the vastness and variety of it.”

The work will be unveiled during the summer’s final Friday Night Live event from 6 pm to 8 pm by representatives of One Main Management, M2 on Neil and 40 North, the Champaign County Arts Council. The building is located at 301 N Neil.