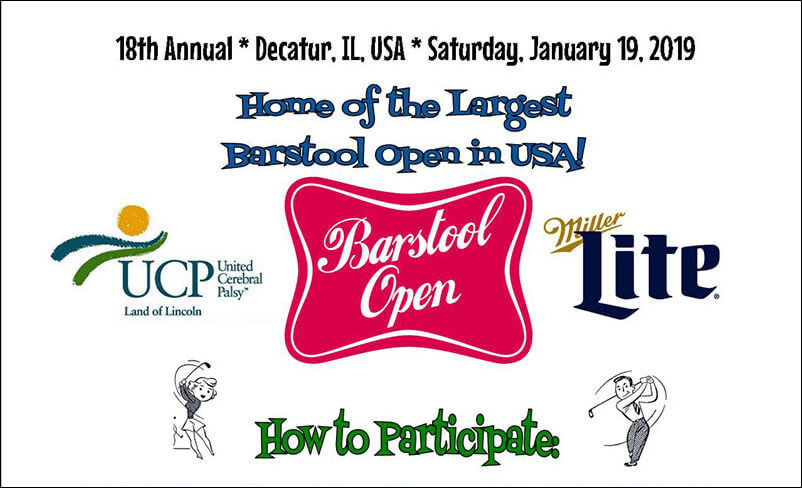 So here I’ve spent more than four decades on this Earth and it never occurred to me that beer, putt-putt and barstools could go together. Then came the New Year’s resolution to have more fun locally, and a new friend’s need to fill a slot on team “Let’s Go For It” for the 18th annual 2019 Miller Lite UCP Barstool Open in Decatur.

Perhaps you are wondering what a Barstool competition is. Essentially, it is a bar crawl with miniature golf — aka putt-putt — thrown in. Each bar has one hole for a total of seven destinations/putt-putt greens.

As I handed over my $40 fee for the good cause supported by the event — United Cerebral Palsy Foundation — that Saturday, I had no idea how difficult it would be to hang in through to the final destination, Tuscany Steak and Pasta House. Did I mention this claims to be the biggest event of its kind?

Our team started out the day huddled with over 100 other competitors in the backroom of Sliderz Bar & Grill, where by 10 a.m. some players already were on their second beer of the day. In the dim light, one could make out occasional neon glow popping up here and there. Music was blaring, and so you may be forgiven if you didn’t hear your bus number called. Yes, we all had to pile on school bus number 4 as our bus presumably left about an hour earlier while we were enjoying our second round of beer. Ooops! 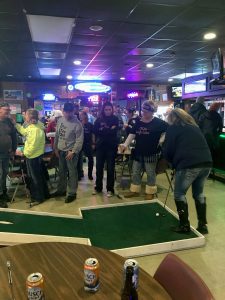 So off to the indoor putting greens we went, on a big yellow school bus that would likely need a good scrubdown before Monday morning. At our first hole we seemed to soak in the proper technique of putting, thanks to a helpful volunteer. Sometimes it seemed to be a game of chance, as beginners’ luck meant that some of us only took three tries to make the hole as our in-house veterans took a few more swipes.

It is worth noting that alcohol intake was not allowed as a handicap, which may have increased the odds for some folks. The Miller Lite specials were irresistible, and depending on where you were, the shots were pretty cheap too — even free, if you made a certain shot at some bars. Clearly this was the highlight of the year for many local establishments.

There were a number of great team t-shirts and names. My favorites include “The Putts on You” and “All the Single Ladies.” Some putt-putt courses snaked around in tricky L-shaped mazes; one had a water trap, which could be hit going through a tower of Miller Lite beer cartons. Even if you thought you had a strategy, it usually failed, but no matter what, there were still cheers for all. 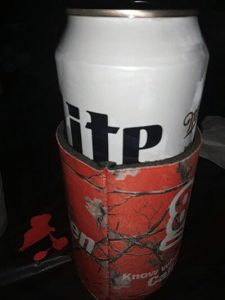 It was the volunteers who kept score, also acting as referees in cases where golf balls were driven completely off course. They also likely left for the evening hoarse after having to yell out for teams to take their turns, as music and conversations about musical choices, tales of last year’s Barstool Open, and presumably some ill-timed bathroom breaks continued on in the background.

Our team coach/leader celebrated her birthday with a slice of apple pie and shots at Whit’s End, as many of us may had begun to doubt our chances of hitting a ball in any direction, let alone toward a tiny hole at the other side of the bar.

If there was to be a soundtrack, it would likely include a number of Queen hits such as Fat Bottomed Girls or Bohemian Rhapsody for those with a flair for the dramatic. We all sang along with Freddy. There may have been some head-banging and there may have been another round of shots. 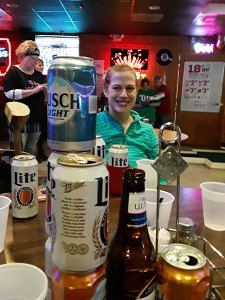 It felt like 3 a.m. when we took our group photo, but it was actually 4:30 pm and we only had  a half hour to get back to where we started. Maybe a better theme song for the day could have been the Poison hair metal classic Nothin’ but a Good Time. As a good time is what we found in meeting new people and seeing new places across town.

As the D.J. entertained the crowds at our starting line at Sliderz, many seemed poised to take the celebration into the night. I admit that I never saw the inside of the final stop on our course, Tuscany Steak and Pasta House — maybe next year. Someone may have attempted to turn in our incomplete score cards. Should any volunteers be reading this, I don’t want to know my score!

And I got a prize anyway: Finding some good reasons to return to Decatur. It could have been the beer goggles, but there is plenty to enjoy in Central Illinois’ lovable rust belt city that is also home agricultural giant ADM, Tate & Lyle, and the Farm Progress Show every other year.

On the drive back to Champaign, my designated driver and I plotted our return for 2020’s Barstool Open — wiser and undeterred to make it through the entire course.