The ArtFarm has only been around since January 2018, but it’s already made a big splash on Decatur’s art scene. Its 11:11/Ankrom Gallery was voted the best art gallery in town earlier this year by the readers of local daily Herald & Review, who also hailed The ArtFarm as best local business and third best gift sop.

Not content to rest on such laurels, co-founders Peggy and Jim Baity are kicking things up a notch with the “Out Back” Summer Music Series — intimate performances held in The ArtFarm’s back patio during artist receptions timed to coincide with downtown Decatur’s First Friday Art Walk.

The series got started in June with local alt-rocker Riddle providing the soundtrack to “The Death Show,” a collaborative exhibition by Urbana’s Lydia Puddicombe, Springfield’s Eli Brown and Hamilton, Missouri’s Kim Caisse.

How did three artists from three far-flung towns come together? “I know [The ArtFarm co-owner] Peggy [Baity], and she’s been asking me to come and do a show, and it’s sometimes hard for me to get enough work together to fill this much space because I tend to work smaller,” said Puddicombe, who specializes in wood cut illustrations, during the June 7 reception.

“So I said ‘hey, as an idea what about my two friends and I doing a group show instead?” Puddicombe went on. “So it’s kind of cool because we’re all from different towns and none of us are from here, so it lets us be doing something in Central Illinois but a little bit outside our own home turf where people are used to seeing us.”

Commenting on the exhibition’s title, Brown, a mixed media artist who concentrates in acrylics, watercolor, dry media and collage, said it came from a common theme in the three artists’ work, but she emphasized that the goal wasn’t to be morbid. “We looked at it from more of a death-positive point of view,” she said.

“I think the three communities coming together was just a matter of friendship and mutual admiration for each others work,” said The ArtFarm’s Peggy Baity by email. “I definitely promote local/regional artists to show in the 11:11/Ankrom Gallery, but this is the first collaborative show we’ve hosted — but we’re just getting started, so it will NOT be the last.”

The ArtFarm is hosting a solo exhibition this month — stop by on Friday for the artist reception, plus the second edition of the “Out Back” Summer Music Series! 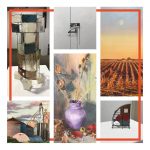