In the weeks leading up to Christmas, Central Illinois artists caught their breath from an active art show season and did something they rarely get to do – shop local with one of their own.

Jill Miller of Hooey Batiks opened her home to fellow artists to show their wares to one another and get their own last-minute holiday shopping done. Think of it as a commercial and social event that many look forward to each year.

Organizing memorable get-togethers is what Miller has done for almost two decades now for her fellow artists. She’s curated an eclectic mix of area art shows and fairs, publicized them to the relevant audiences and put together shopping experiences to remember.

Miller’s chosen art form is the batik – an Asian practice where the artist paints with melted wax using a special tool. The wax covers areas that then go un-dyed. After peeling off the wax, the result is a colorful design that is one of a kind that is wearable art.

Miller’s unique wearable art ranges from t-shirts to skirts and dresses. Robots, flowers, skulls and whatever else Miller imagines can make a one-of-a-kind statement on any day of the week.

Her colorful home in East Urbana is also the site of her batik studio, which sprawls across the basement, leaving her with ample space to showcase fellow artists’ work on the main level – and serve snacks from the corner kitchen.

Few other artists see a home as a perfect place for an art show, but that’s exactly what Miller recalls thinking when she first set foot in there in the 1990s. The historic Urbana home underwent a major renovation after being a furniture factory in the 1920s; it was briefly home to legendary Parasol Records, which was established by Miller’s partner Geoff Merritt.

On any given day, one is greeted by Jill’s colorful Batik creations and three lounging cats that glide and pounce between Miller’s creations and that of others that fill the space. There’s even a portrait of Vivian, a blue-eyed calico, that was done with a bit of whimsy by local artist Robert Chapman.

On Saturday, Feb. 8, the usual colorful cast of characters (including Central Illinois Buzz) arrived at the Home of Hooey for yet another art show. Each artist had his or her own cozy exhibit space at the ready, thanks to an open floor plan and Miller’s boundless imagination. From having a tarot reading to commissioning a poem and even supporting Hospice Hearts, it was all possible on a chilly pre-Valentine’s afternoon in a space of 800 or so square feet that somehow seemed much bigger.

If a glance around the “House of Hooey” is any indication, there is no way shoppers could leave empty handed and Miller too may make more room on her walls and shelves for more of her artist friends work.

Miller’s reputation as the extrovert putting together unique art shows is a stark contrast the the early days of her art career, when she was hesitant to speak to potential customers and was urged by her sister to engage with the public at Springfield area art fairs. And she’s never looked back.

In addition to her home shows, Miller has been involved in several popular Central Illinois events, such as Sleepy Creek Vineyards Art and Music Festival in Fairmount, where she took over the Art Wrangler role about five years ago so founders Joe and Dawn Taylor could focus on the wine and music aspects of the festival. She passed on the baton last year, happy to have helped the fest become a fixture on the CI summer calendar.

In Springfield, Miller helps organize funky pop-up shows with catchy titles such as the ArtHive Spring Swarm and the Handmade’s Sale. It’s a group effort, but “I invite the artists and make sure we have a nice balance and an eclectic group,” Miller said.

This year the “swarm” will once again converge on March 7 at the State House Inn at 101 E Adams, and will feature many Central Illinois Artists. 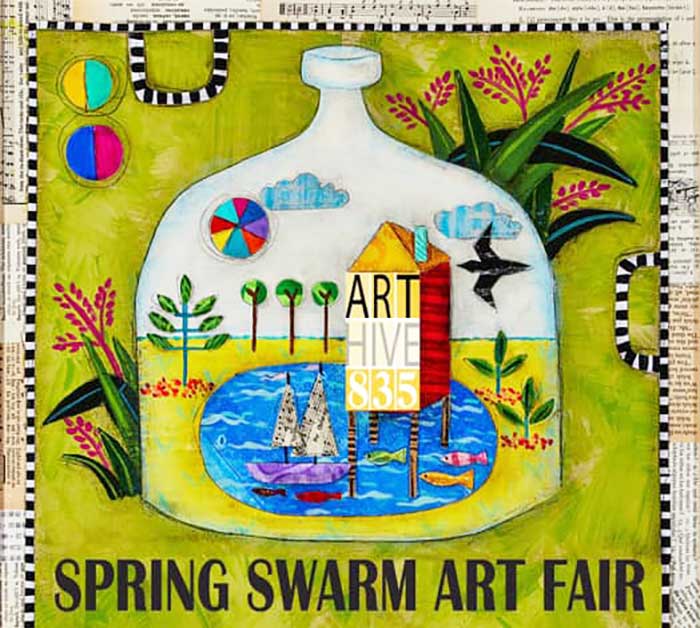 The artists of ArtHive835 are swarming the Governor’s Ballroom at the State House Inn. Free Admission

Also coming up again on Aug. 1 is the second annual Crystal Lake Art Fair, which Miller was instrumental in organizing in a short two month span last summer along with the city of Urbana, the Park District and 40 North, the Champaign County Arts Council. “Kelly White of 40 North and Janet Soesbe of the Urbana park district are awesome and have great experience running events, and I was able to call on my art friends,” Miller said. “The three of us made a great team and Urbana was ready to come out and support an outdoor summer art and fine craft fair!”

One thing is for sure: The “House of Hooey” may take up a small piece of real estate in Urbana, but it looms large in CI as the springboard from which Miller takes her creations on the road with her fellow artists.